When I flew back from Japan in January it was the first time I became aware of this ‘coronavirus’ and I really didn’t think much of it, only that it sounded pretty nasty and I was glad to be back on home turf.

The winter season came to an abrupt end on 14th March when ski resorts were closed across the French Alps. With my ‘office’ officially shut, my earnings have been slashed. I am thankfully (I think!) eligible for some financial support. Needless to say I am one of many, and I keep reminding myself that we are all in this together. Despite severe social distancing, I am not alone. We are not alone.

Supreme have also been total stars trying to look after their instructors, managers, office staff, clients, suppliers and themselves the best way they can. I’m so thankful I work with such a solid team.

From spending the majority of my day outside to now confined to my flat and, thank goodness, it’s balcony, has been more of a shock to my system than I thought it would be. I have lost my mind once or twice (yep tears and tantrums), and for someone who is always doing something, I have not found ‘slowing down’ and ‘taking it easy’, well, easy.

I was anxious about leaving the house and getting a fine, as it wasn’t clear what constituted as viable exercise. So I didn’t.

However, for my own sanity and well-being, I finally left the house on Sunday. Never has recycling been so enjoyable. I’ve since decided that going for a run along the route de la Plagne, never more than 1km away from home and staying within my 1hr allowance, should be OK. The Dereches would be an option, and I might venture down there, but quite frankly it sounds like it might be a breeding ground for COVID-19. 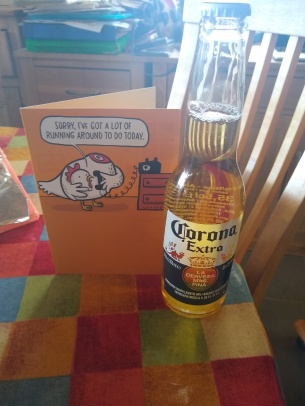 My birthday 16th March was a pretty good day all things considering. Definitely moments though when I felt like the cat…

This time last year (mid March let’s not forget, however much it really does feel like a weird inter-season in April what with no more skiing and dry weather) I was only beginning to build some running stamina with short runs up and down this long straight road in Morzine. If (!) the snow does return, I think sadly then the enormity of the season ending early will hit even harder.

It’s been a week since lock-down and I feel I have been pretty productive with this extra time. I was trying to work out why this lock-down didn’t feel like a normal inter-season, for even during that time I really don’t get out much. Or do I? I can go for bike rides and dog walks, see people (not many admittedly!) but I could if I wanted to. I think I’ve realised how much I do get up to during inter-season.

Not only that, but everyone has slowed down, not just me. No one is working as much anymore and the demand to do things and get things done has consequently ground to a halt. Slowly embracing this release of pressure of constantly ‘going’ and ‘doing’ is a funny feeling, but I’m sure I’ll get there. 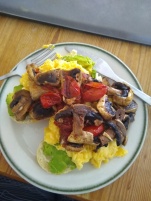 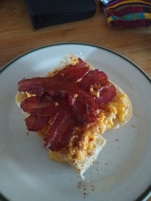 Time to cook and bake! Not had porridge for breakfast in ages. Well, a week!

It’s no lie either that I’ve not been 100% well all winter. I’m not convinced I’ve had the virus, but I have definitely had a virus or more throughout February. It was a very busy and challenging month but with such a great team this year, they made it fun and we were just beginning to enjoy some spring skiing and adventures. I’m sad we didn’t get to enjoy the rest of the season together.

Hugo doing the most intense paint by numbers

What summer brings and when, who knows? What I do know though is that Buzz Performance‘s Joe and Amelia are keeping us active with their online LIVE Facebook classes (body conditioning, strength sessions, and turbo rides as well as daily P.E for children), bringing our Buzz Hive together and also reaching out to fellow Buzz bees around the globe as well as welcoming newcomers. Guest appearances from their baby girl, Lia, is also a highlight; such a happy little girl! 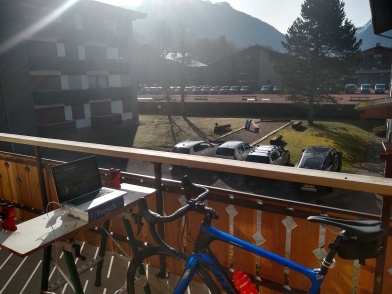 turbo with a view

and Lia cheering us on!

Yep, I may be going crazy but this was taken post the sweaty Sunday Buzz Challenge.

I’m also able to continue my pilates class with Georgie via Zoom, and we even gatecrashed a friends’ family quiz the other evening using the same app, which was very entertaining.

My mind and body doesn’t quite know what’s hit it, but it is what it is. We’ve just got to keep controlling the control-ables and hopefully we can come out of this fitter and stronger, with cleaner houses and more appreciation for the world we live in.

One thought on “Winter 2020 #stayathome”