Come fly with me

In the latest Ski & Board magazine, I was pleased to see an article entitled “Don’t suffer the cold shoulder” encouraging snowsport enthusiasts to strengthen vulnerable parts of the body, and to start with, the shoulder.

As I am prone to shoulder injuries, I couldn’t agree more. I suffer with joint hyper-mobility, especially in my shoulders and elbows. Tumbles (or technical touchdowns as my father likes to call them) that I have had skiing, often result in a damaged shoulder. That classic ski injury, way up there with torn ACLs. Honestly though, dislocated shoulders, broken collar bones and the such-like are much more common in ski and snowboard accidents than you might think.

The shoulder is a fairly complex ball and socket joint, with delicate tendons and ligaments holding bones and those all important rotator cuff muscles in place. Shoulders are not quick to heal should you injure them. Back in 2012, after months of physiotherapy, I had keyhole/arthroscopic surgery on my right shoulder to re-attach a large labral tear (caused from one of those technical touchdowns I was on about) and stop my shoulder bouncing around.

Between the fantastic surgeon, sports doctor and physiotherapist I saw in Morzine, and (I might as well give myself some credit!) the hard work I put in to rehabilitation, that shoulder has been pretty good ever since.

Parsonage-Turner syndrome affects the nerves stemming from the spine into the neck, shoulder, arm and around the shoulder blade. It causes pain and waste and weakness of muscles. It can cause paralysis of some muscles, which consequently cause other muscles to work harder and pull joints out of place, or not hold them in place, such as the scapula. For nerves to repair, it takes a VERY long time. You need to be very patient.

So the ideal injury for someone like myself, who thrives off being kept off her feet and doing sport and exercise at every opportunity; always doing stuff.

On August 8th, I woke up to some pretty excruciating shoulder pain. My immediate thought was “oh poo! Here we go again…” But, as I was feeling poorly with a fever and  a head about to explode with snot, I tried to go back to sleep. Nope, this was not possible. I investigated what was going on and discovered that my shoulder blade was sticking off my back, really very prominently. And, in whichever way I tried to move my arm, it felt like it was dislocating. I had nerve pain down my arm and general muscular soreness all over, everywhere. Needless to say, I felt pretty sorry for myself.

The (amazing!) chiropractor and physiotherapist at Queenstown Health in New Zealand spent nearly two months working on my abnormal body as they claimed to have seen this before (but not to this extent – obviously…) complete paralysis of the serratus anterior muscle and a winged scapula. The doctor here claimed he’d only seen similar 3 or 4 times throughout his career, and Sarah at Mountain Rehab in Morzine hasn’t quite seen a shoulder blade stick out quite this much; a known problem, but just fairly rare (would I expect anything less?!)

Somehow, I have damaged the long thoracic nerve that feeds to the serratus anterior muscle. The muscle lies underneath the scapula and holds the shoulder blade in place. For lack of a better word, mine is ‘dead’. It has shown some sign of life recently, but in certain movements I still look like I’m going to spread my wing and fly, albeit in a circle and very inelegantly.

Why did this happen? What is the cause?
Well, we just don’t really know. At least that is what the doctor is telling me. After some research on trusty Google (because “it just happens, you’re unlucky” isn’t a good enough answer) I believe that the infection I had that weekend, combined with possibly (!) repetitive movements in assisted pull-ups and upper body training, the nerve, around an already sensitive part of my body (not just from the surgery, but also with joint hyper-mobility) went on strike.

No more burpees. No more headstands and handstands. No more Yoga. No more mountain climbers. No more plank. No more attempts at pull-ups. No more emptying the dishwasher. No more hair-washing.

Okay. I exaggerate. I can do most of those things, but painfully and without severe winging, which is very uncomfortable. You may also think to what am I complaining about? Who wants to do half those things anyway?! Well, I do. Maybe not empty the dishwasher, but that, and among other day to day movements such as pointing and driving, are part of living. The other exercises, as a fitness nutter and personal trainer, they’re kind of handy to be able to do.

I discovered this video on Men’s Health to strengthen the serratus anterior. I’m not able to do most of the exercises as I still don’t have full activation of that muscle, BUT I CAN SWIM! I am so unbelievably grateful for this and after 3 sessions I can last about 25 minutes doing 250m of crawl, breaststroke and backstroke each.

Time, gentle encouragement through exercises, tapping the area needed to ‘wake up’, time, massage, time, and oh more time, 12-24 months specifically, and I might not look like I am trying to take off every time I put something away in a cupboard or attempt a plank.

If anyone out there has had the same or similar, please get in touch because I really do feel like a bit of a freak! 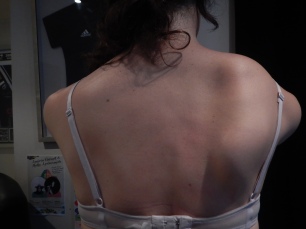 For all those skiing this winter – it is highly unlikely you’ll suffer with this particular injury, but a shoulder injury you just might. So, along with squats and lunges, running and cycling, jumping and coordination training, be sure to give your shoulders and other areas of your body some attention.