After a good start to the summer I was keen to revisit Grand Trophee Morzine Haut Chablais Mediofondo (105km with 2370m of ascent) which I took part in on the spur of the moment last year.

I’ve re-read last year’s post and I’m so glad I do take the time and effort to record what I get up to. To look back and remind myself of just how far I’ve come is so satisfying and pushes me to keep getting better.

This year, feeling stronger and fitter after a kick start to training in Mallorca, and completing an Olympic distance triathlon, I was very keen to have another shot at this event and see how much faster I could do it.

The obstacle? The weather.🙄

So, I left signing up, again, to the very last minute. We’ve had a somewhat damp May and start to June, but each and every day has had dry spells and some sunshine, so if one was organised and looked at the forecast there was no excuse to not get out and do something!

Waking up Sunday morning to slightly grey skies wasn’t the best, but having pedaled once or twice in damp weather this spring, unless the rain was torrential, it wasn’t going to phase me. I know, right! How my cycling mind is maturing.

Arriving at the tourist office for the start, I scanned the area for Buzz gear and spotted a few friendly faces. We went to cheer off Joe and Jon (both training for Ironman’s in September) who were cycling the Grandfondo (155k with 3800m of ascent). I feel Rachel from Mallorca’s quote is applicable here “inspirational, but I wouldn’t do it”. Maybe one day…!!) and then returned to the Mediofondo team.

Thank you Tony for the photographs! Sarah and Marc also did the race – great effort, guys!

I latched myself on to Buzz’s guest, Tony, for the descent thinking if I could stick on his wheel I will have already shaved off time from last year.

TOP TIP: if you want to stop, pull right over and make it VERY clear. Don’t just stop in the middle of everyone descending, are you nuts?! (One small hitch!)

Another little confusion at one junction threw the rhythm out the window but semi local lass here told them to keep pedaling down to the turn off which was only a 100m further down.

The first climb to La Vernaz felt good, and I had a snack at the top. The ride up towards Bellavaux and Col de Jambaz, was brilliant and I thoroughly enjoyed this part of the ride, feeling strong.

It is, in my view, undulating 😁 and the scenery is gorgeous.

Descending towards Megevette, I spotted something in the middle of the road.

‘Hmm, balls, that looks very much like the Buzz logo’.

A fellow participant rolled up next to me and with a heart of gold said,

Up he pedaled 20m, retrieved the abandoned vest and gave it to me. Merci, merci, whoever you are.

The only Buzz person in front of me I could think of was Eric and when I went past him on the Joux Plane (yes, I know how that sounds 🙄 ) I blamed him for the extra weight I was now carrying and that it probably cost me at least the 2s on the 4:30:02 time with which I finished! Je t’emprie, Eric.

The descent down towards Mieussy was again very enjoyable. Not quite the views of last year but still glorious nonetheless.

My parents’ accountant spotted me on the bike. A little random and surprising, but nice to see he was getting involved in the event too! How he recognised me, I’m not too sure!

Onwards towards Mieussy and I ensured I was taking on fuel regularly. I’ve decided that for bike rides buying a litre of pure fruit juice and splitting it between two litre bottles and then topping them up with water works well for me. Nakd bars seem to be enough food to keep me going and I ate one every 45 minutes to 1hr. I’d also eaten a big bowl of porridge that morning and a big meal the night before. I didn’t feel like I was lacking in energy at all. Nutrition is important and when I reached the finish my clothes were covered in salt. I hadn’t cramped, but definitely needed to re-hydrate with electrolytes and the suchlike.

To also avoid having to stop to go to the loo on route (again, important and worth noting!), I made sure I drank plenty the day before and then when I woke up (7ish) I just sipped a little water as I knew once I was on the bike I could glug away.

Mieussy to Taninges, I was pretty much alone until a non-competitor came out of their house for a ride. I set the pace I wanted to cycle, and without saying anything, he pulled in front of me and lead me all the way to the turn off up the Joux Plane. Cheers!

The Joux Plane is never easy, but I felt I was covering ground. The first bit is very steep, I had forgotten just quite how so! Towards the last 5km, I had pain in my knees and a few girly pains (nice timing body), but standing up out my saddle (as I learnt last year), really did help ease my joints and lower back and stretch out. Just keep pedaling.

Upon reaching the top, the weather closed in and it was murky and drizzly so I decided to carry on without putting on a raincoat and descend; we were nearly home!

Last year I had to stop on my way down to shake my shoulders out. Not this year, and (despite the narrow bits where they were doing road works) loved it!

The last pull up to the lake was made easier knowing I was nearly finished, just one final push. A fellow ski instructor was just in front of me and this proved to be that last bit of motivation I needed to finish strong; I was going to have him! A little banter was exchanged and I pushed to the finish. 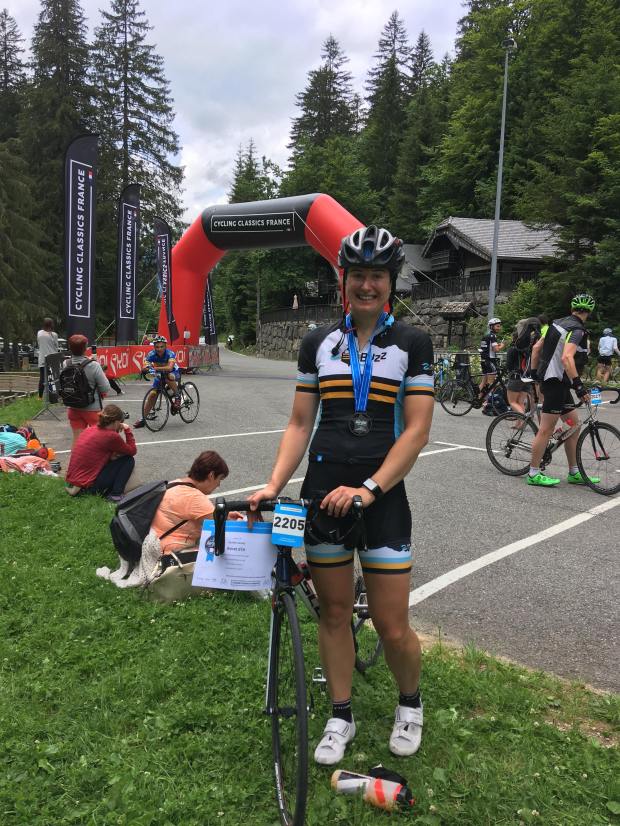 A gimpy smile but trying to wear the Buzz kit proud. Thanks Hugo for the pic and coming to support me!

Time on the bike more than anything has increased my confidence, speed and strength. I’ve learned tricks to keep me comfortable, getting better at feeding myself (last year I was worried just about reaching for my bottle, let alone anything else!) and knew the route.

Here is my route on Strava. 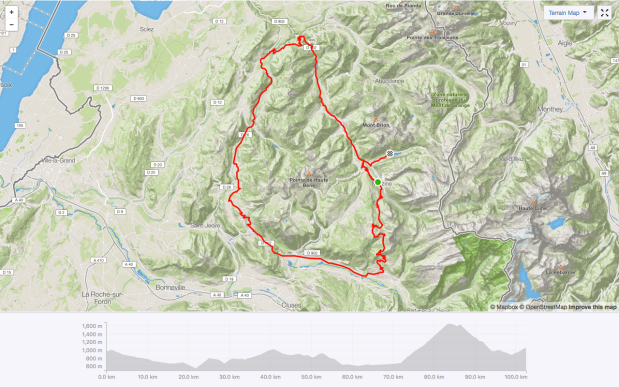 Particularly satisfying statistics for me were knocking off 10 minutes on the Joux Plane climb from last year, notably the last 5km where I knocked off 6 of the 10. I also descended 3 minutes faster than last year’s effort and a lot less people went past me on all the descents. Phew! I also knocked off 4 minutes to Col de Jambaz – in fact there were shiny PR’s all over my Strava record making me one happy girly.

Let’s see what I can do next year!