Making a dent in La Dent

Thank you Jamie for the title.

La Dent de Nendaz (the tooth of Nendaz) overlooks the village and the slopes of Nendaz. It is a mountain that I should have probably climbed long before today.

Taking the lifts up as high as we could go was more than welcome considering we trek up the piste ‘Grand Jean-Pierre’ once a week in a quest to get fitter (more on that in a future post). This left us with barely a 200-300m climb and took us a leisurely hour. Most of us (Phil, Kevin & Jamie) ‘booted’ up, but Sandro, with his new Black Diamond Telemark touring kit (check out his spring Telemark video here), wanted to test out the skins, so skinned up as far as he could, albeit a slightly more scenic route.

Part of the British Association of Snowsport Instructors (BASI) qualifications is the European Mountain Safety (EMS) examination. Now, I haven’t had the smoothest of rides through my BASI qualifications and the EMS is providing the final bump along my path to success in achieving the highest level in the system, the International Ski Teacher Diploma (ISTD). I am due to do a re-assessment at the end of March. Don’t get me wrong; I love powder, I love going off-piste, I love an adventure, I enjoy map-reading (yes, Duke of Edinburgh and my mountain goat of a father have taught me well) and learning about snow but, I’m not going to lie, it does make me nervous. Accidents happen and often involve those with the most experience. Perhaps with greater knowledge we take more risks?

The feedback from my previous attempt at the EMS was to put my knowledge of snow and avalanche (studying the snow pack and the way snow layers itself up depending on the weather, the snowfall and then the risk of avalanche) into action. So I am working on my confidence (story of my life) with decision-making whilst in Backcountry terrain.

Today I took advantage of having less experienced company to impart knowledge with and was surprised (and reassured) with how much I remember (all these re-assessments are paying off). Sandro, having just completed (well done him!) the equivalent examination for the Swiss Snowsports Brevet Federal, has had some good input for me, and some questions to test my knowledge, too. The climb to the top of La Dent is along a ridge, so fairly safe and was well tracked out (thank you to the guys who went up on Thursday and yesterday).

As we reached the summit we were greeted with magnificent views. The views never get old and we were all whipping out our cameras and phones to record the moment.

The summit on the left and the ridge on the right

Jamie and Sandro trekking up along the ridge 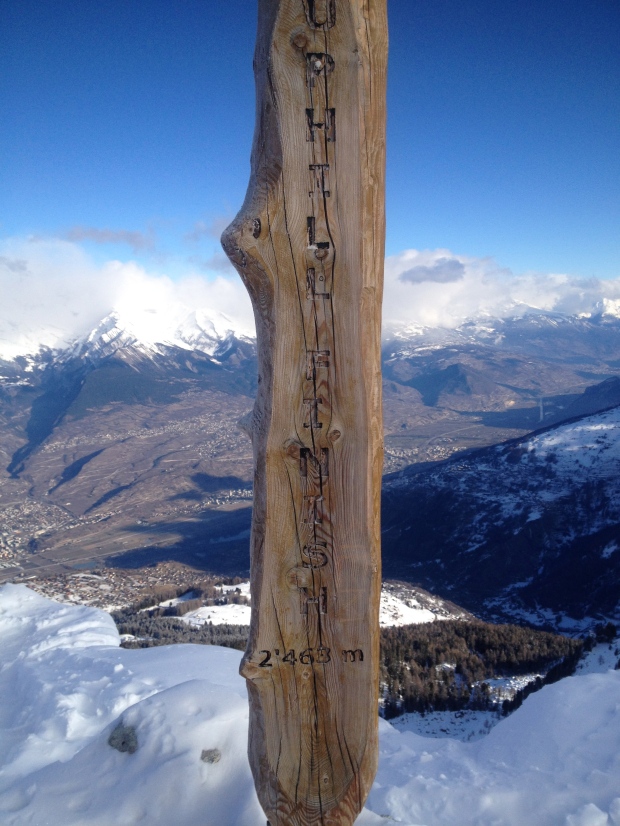 Always a cross at the summit.

The mountains make me happy. I also look like I have ballooned over the festive period. It’s the layering, I assure you.

We then scouted around to see what route down would be best. After all, aside the beautiful scenery, we were after some nice snow to ski. We decided on the north facing slope and set off one at a time. Slightly heavy with a few rocks in places, but definitely powdery snow, we all had smiles on our faces at the bottom. We then got lost in the woods trying to get back to the piste…oops! Nothing like an adventure.

I am very happy to have finally gone up Nendaz’s highest peak and it’s now time to go touring further a field and become more confident, but to remain safe, in order to smash the re-assessment in March.

Just before I decided to publish this post, this article, written by Neil McNab was circulating on Facebook. It is a thought provoking read.