Ooof it was a hotty.

After much deliberation, discussion, withdrawals, and swaps we entered two teams into the Machilly team event.

Tri Montagne: Helen, Jon and me

Turns out we were pretty evenly matched and finished with Tri Montagne coming in first out of the two teams, swiftly followed by Buzz Performance. Excellent work everyone!

The Rules (eventually established after, again, much deliberation!)

Each team had to have a minimum of 3 people at the front at all times; the 3rd person to cross the line gave the final time for the team. In theory, we weren’t allowed to separate ourselves by more than 20m at all times, and had to wear matching kit. We could draft on the bike as a team, but not sit behind other teams. Each team had to keep a 35m gap between another team.

We stuck together for the entire course, trying to help each other where we might be stronger and others weaker. Whether this was the most beneficial or not who knows.

Pacing is important and judging how to race is an art; to go hard where you know you’re strong and then maybe struggle where you’re not, or try and remain consistent, conserving energy where you can and tackling the harder parts better than you may have otherwise.

“Allez les filles” was often shouted at us, and then swiftly a “ahh, et le gars!” as they spotted Jon behind us. We discussed how it was a little condescending, giving almost an extra cheer to girls, but Jon felt the whole thing was rather condescending. It made us all giggle though, and we did have some good banter between us over the entirety of the course.

No wetsuits for the the swim. We swum 1000m around the little lake in rather murky waters. Setting a pace and trying to help Jon draft was a good challenge.

The most tentative entrance to a lake I did ever see!

All the giggles – you got this, Jon!

The 56km, 1000m (ish?!) +/- bike took us up the Col de Cou and Col de Saxel. It was undulating to start and finish, with the climbs and descents in the middle. Jon dragged us through on the flats and descents, and we tried to pull him up the hills. To his disappointment we did not literally push him up as we witnessed some teams do. The views were awesome, looking over towards Lac Léman. I’d never ridden that way and thoroughly enjoyed it. Coming into transition, I managed to get my feet out my tri shoes, and tried using elastic bands for the first time on the way out, but I’m not sure I was entirely that successful. There’s definitely room for improvement! 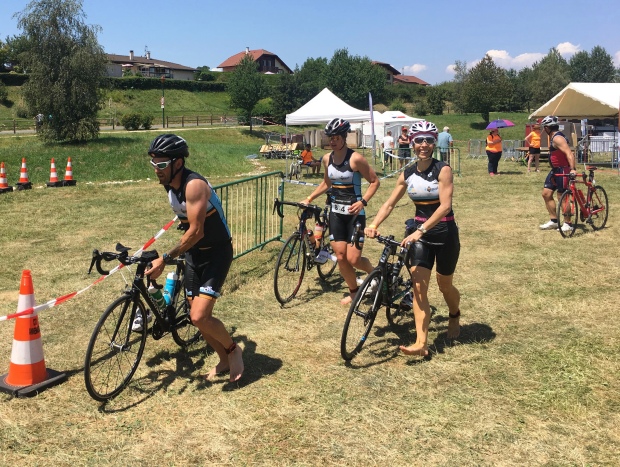 On to the run and we were directed straight out on to the road on an, albeit gentle, but horrible incline. In the heat my body went ‘what the hell are you doing!!’, and it took me at least the first kilometer to settle into a steady rhythm. I was scared to exert myself too much as I could feel I probably hadn’t consumed enough on the bike and was waning somewhat. The familiar tug of a stitch was threatening to ruin things, so I just wanted to keep running at a safe pace. I still have various nutrition options to try that friends have suggested and I think I need to actually sit down and do some maths so I get the right fuel in over the course of these races. Training my mind too, more and more, believing that even when it is just hot, I probably will be ok to push. I think Nice-Cannes has given me a bit of nerves when running, but I’m trying to overcome it bit by bit. We all found the heat pretty tricky, but it was great to have each other for support and encouragement around the 8.4km course. 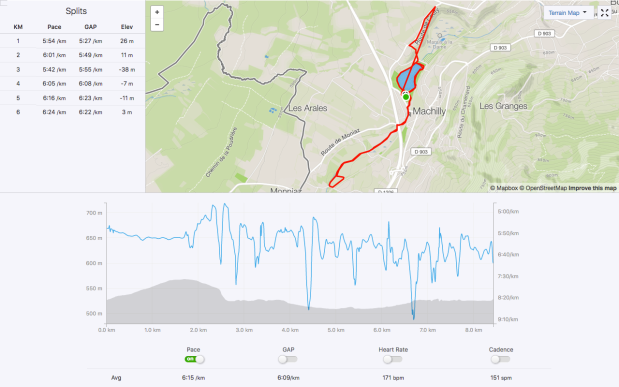 We crossed the line together and proceeded to cool off in the paddling pools and re-fuel. Those training for long distance events went off to run for another 20 minutes or so; admirable but nutty!

The event was excellently organised, well marshalled and there was a great atmosphere with everyone cheering each other on.

To race with fellow club members was great fun and a giggle. I found it insightful as we chatted about tips and how to potentially race better.

Thank you to Phil and Helen’s parents who were regularly spotted shouting words of encouragement. We also appreciated the juniors and parents cheering at the first stages of the race, after they had completed their own event in the morning. All the photo’s and video clips are theirs – merci!

I’ll be keen to do this event next year, however this heatwave malarky seems to be a regular occurrence at Machilly…I suppose it’s all part of the fun and games!