Anyone who follows me on Facebook and Instagram will have been updated with regular snapshots of my experiences, but here is a more detailed account of my antics in Japan so far.

The journey out was fairly smooth…

Upon arrival at Tokyo, “please could Miss Rachael Anne Hallewell present herself to ground staff once they have left the aircraft”. I genuinely had my heart in my mouth, convinced I was not going to be allowed into the country, and was frantically thinking of what I could have possibly done wrong.

It turns out they had me down for an earlier connecting, internal flight to Sapporo than for the one I had originally booked. I ended up sprinting through Tokyo airport, with a very nice Japanese stewardess, to manically go through customs (I had to squat to get my photograph taken for my residency card #giggleoftheday – more to come about that), collect my ski bag, change terminal, re-check in, go through customs again and get on the plane. All in less than an hour; what a sweaty mess!

Courtesy of my brother’s girlfriend, Steph, an aeroplane selfie with my new ‘minion’ eye mask.

Again, thank you to Steph. Don’t worry – one still remains! 24hrs of travelling, there was no chance I was going to be too disciplined.

I took the bus up to the Hirafu Welcome Centre where I was met by my lovely housemate to be, Eri. 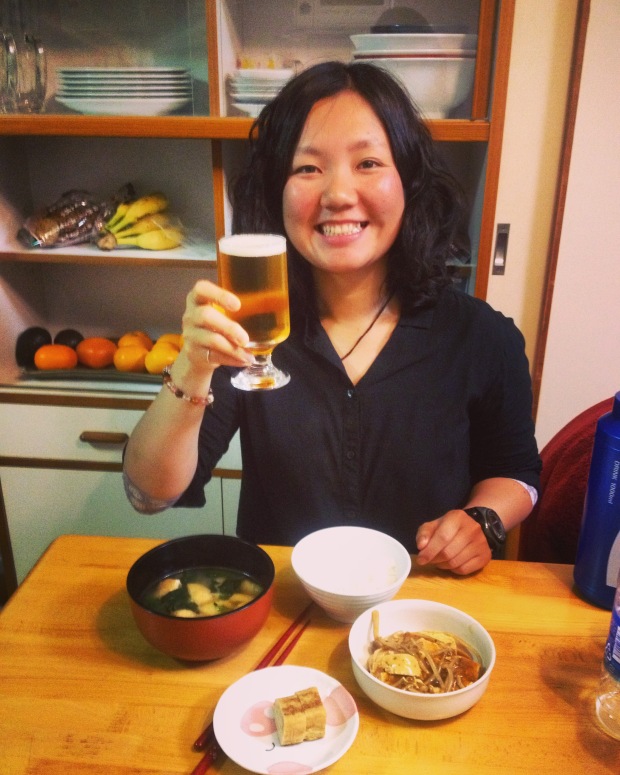 Eri is my personal chef, tour guide, translator and partner in crime for the season. We are very much ‘little & large’ – she is 155cm and I am 181cm #giggleoftheday

Jet lag took it’s toll for a couple of days, particularly between 8-11 am local time with a pounding headache. Apparently you need a day to recover for every hour difference. I say ‘pah’ to that and seemed to be alright after 4 to 5 days.

I am living in a little green, traditional Japanese house. There is one bedroom with two mattresses on the floor and lots of blankets, an open plan little living room and kitchen with a heater, tv with entertaining Japanese television, sofa, and a loo and shower. It’s cosy and perfect!

New home for the next 5 months – the little green house in Crayon Village.

This is something I have started doing as there are quite a few things that have made me giggle. I have insisted that Eri tell me when I have crossed the line. So far she finds it entertaining to see what I find amusing, and I find it funny how shocked she is at how dirty my mind can be at times. Oops…

At the 100yen (roughly 50p) store, I found this resistance band (actually £1). It made me giggle, quite a lot. Definitely not hard, but at least workouts are fun.

It took me longer than I am proud of to realise why this piste map was so high off the ground. I couldn’t read a bloomin’ thing, and then the penny dropped… Wow, they really are expecting a lot of snow!

The boots I brought with me do not stop the snow from invading my shoes, so I invested in this fetching pair. *Note the height of me and the door #giggleoftheday Well, until I smashed my head.

Who am I working for?

Until I actually arrived in Japan, I was reluctant to publicize who I was to be working for. Now that I’ve arrived and started work, I am happy to share.

I never thought this would happen (I am a very piste orientated skier and known for liking to ski fast and bash about the pistes) but I am working for a ski school called Pro-Powder. Don’t get me wrong, I can ski off-piste and in powder to the same level, officially, as my piste skiing. I do really enjoy the powder and off-piste, but back in Europe I just don’t do it very often (mainly, as mentioned previously, I seem to scare away any precipitation…sshh, don’t tell anyone). It is an area of skiing in which I want to become much more confident.

Besides teaching, I am running the ski school training, as well as helping out with some supervising, which involves organising the other instructors to ensure they meet their clients and that lessons take place without any problems.

The team at Pro Powder seem great and it looks like we’re in for an entertaining season. A mixture of people from all over the world that makes for what I love best – a very international mix of friends.

The end of another day’s training

Erm, so yes – clear skies and corduroy exist here too. Yes, the Head iSpeeds did come out to play. Guilty.

Looking at the last few photograph’s it would appear that the snow fall has dried up. Apparently it is still early for snow and Niseko winter season regulars keep assuring me “it will look like this… the snow will cover those steps… this will fill out…you won’t see any bamboo” Well, until it actually happens, I am hesitant to believe it. In the meantime, the pistes are NOT flat. A green piste here is what I would call a pretty sharp red run back home! The terrain is fun and interesting though, the new views are stunning and I can’t wait for the crazy powder days people promise. I just wish my feet would hurt a little less and get used to these new boots. 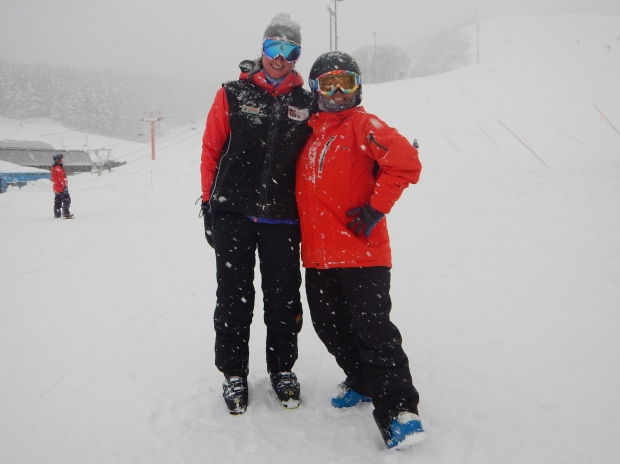 My new uniform ‘vest’. Eri really is half my height. Sort of.

“Snorkel” – another hint about the amount of snow to come!

As a more responsible member of the team (!), I will be driving one of the ski school’s vans over the winter. I was pretty impressed watching Eri swing this Toyota HiAce around in the snow and thought to myself ‘blimey, I am going to look like such a wuss’. However, they are incredible in the snow. Automatic, a bit long, but with brilliant tyres (you never put chains on apparently – amazing!) it drives through everything. I love it. Not so much the fact it is right hand drive and I am driving on the left. The amount of snow makes for a scary passenger ride too, especially as I seem to have driven past many turnings, carried on at a red traffic light and struggle to remember which side of the road to turn on to, and all simply due to a lack of sight – you can’t see anything! Definition is minimal and the road signs are often covered in snow. Turning the windscreen wipers on every time I want an indicator also proves problematic. 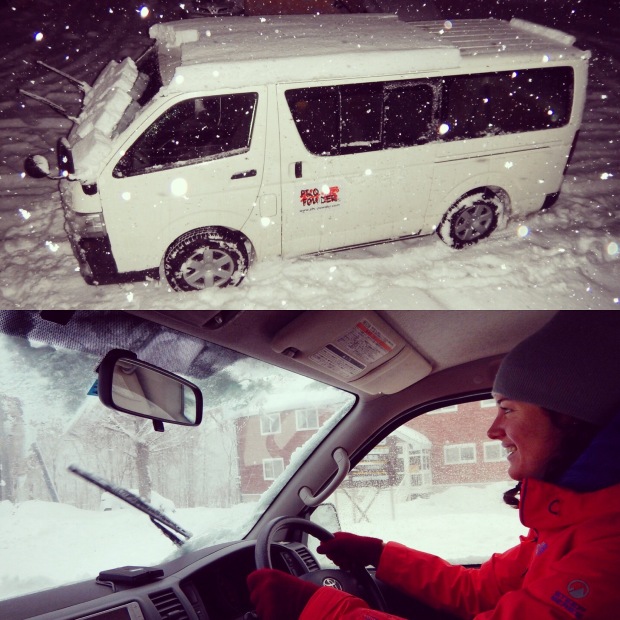 Eri is teaching me (or just cooking for me!) about Japanese cooking. We’ve eaten rice most evenings (mainly because I’ve become obsessed with the rice cooker – the rice that comes out of it is delicious) with fish, tofu or meat and lots of vegetables. She’ll whip up a miso soup in a few minutes and is a life-saver in the supermarket. Today’s shop without her was somewhat daunting/entertaining/took twice as long. 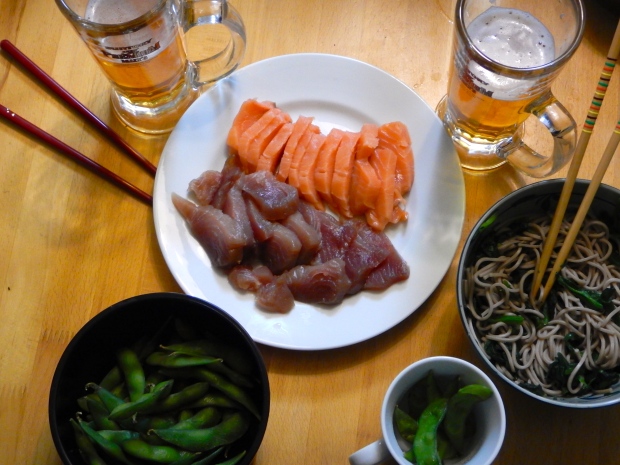 Tonight’s meal of Sashimi, buckwheat noodles and spinach, Edamame beans and a beer – a bit random but still very tasty! 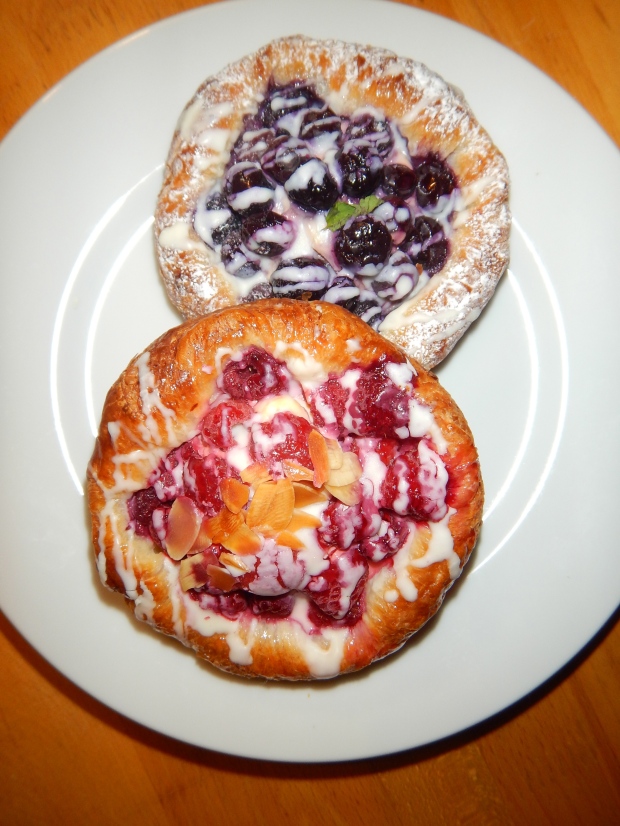 The Japanese are great at baked goods and our boss brought us round a couple of pastries, amazing!

This is all just the beginning. With Christmas and New Year fast approaching, work will no doubt consume my time but once January rolls around I hope to get exploring and discovering more about what already seems to be a pretty awesome place.