On Sunday 24th May I competed in a Super Sprint triathlon (400m swim, 11k bike, 3k run) in Rumilly, not far from Annecy, to ease myself back into the sport and competing. I have been flattered that a few people have asked whether I compete in triathlon over the past year due to looking ‘athletic’, but the reality is that I only did a few sprint triathlons back in the summer of 2011 (Rumilly, Lausanne, Nyon and Passy sprint triathlons), and that is it. Yes, I have kept swimming and running and cycling, but I really haven’t put the three disciplines together consecutively that often.

This summer, as I am in the Alps and not injured, my goal is to complete an Olympic distant triathlon (1.5k swim, 40k bike, 10k run), either in Lausanne or Passy. Before then, my goal is to do the sprint triathlon (750m swim, 20k bike, 5k run) in Geneva in July.

My parents very kindly came to support me on Sunday, with the dog (who was banished to the car as he couldn’t be trusted to not poop anywhere embarrassing) and had only the weekend before been supporting my brother, George as he rowed as fast as he could down a stream.

Ensuring everything was in place for the transitions

Having swum all winter in my private pool (the apartment block I lived in had a (roughly) 18m pool that I often had to myself) I felt my swim would be strong. Since last summer and doing more interval/Fartlek type training, I have steadily become faster at running. However, I turned up on Sunday having only been on one bike ride, in a very long time, the previous Monday. Nevertheless, I was going to give it my best shot.

Setting off on the swim 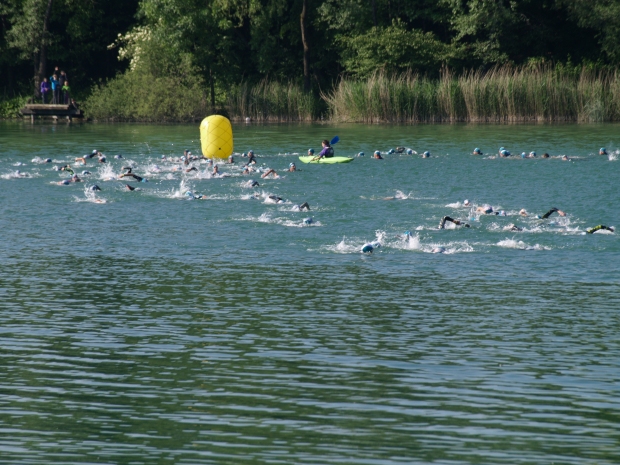 Fighting around the buoy

We swum in wetsuits and after a fight on entering the water and trying to not get battered about, I eventually settled into a rhythm only to have to already prepare to come out of the water. I then had, what can only be described as a ‘right palaver’, trying to get my wetsuit off. What an idiot! It cost me about a minute. Finally on my bike, it was a lovely, undulating ride. There were no scary steep downhill bits and going up has never been too much of a problem, considering every bike ride at home involves a couple of 100m of climbing back home. I happily tried to make up time that had been lost in not being able to get that wetsuit off.

In true amateur style, I don’t have clip on shoes for my bike. My bike to run transition therefore is a fraction quicker than some others (or should be…) but I had forgotten about the jelly leg feeling as you wobble off the bike and try and run. It was all too apparent as my father commented to my mother “she doesn’t really have a natural running style, does she?” Well, no Dad, I was in a bit of pain. I just about found a rhythm and managed to not let too many people overtake me. 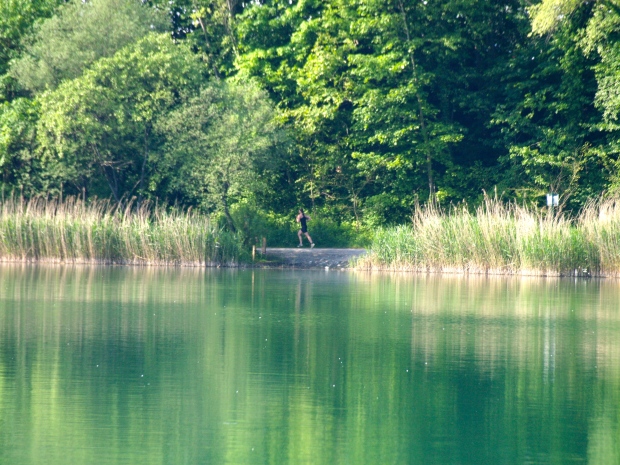 Spotted across the lake

I was pleased with the overall result, coming 2nd in the ‘Senior Dame’ category, 9th female and 75th overall with a time of 47:21:08. I was surprised I was only 2 minutes faster than when I did the same event 4 years ago. Two minutes is better than nothing though, or of course being slower. We left before the prize giving, so I hope I didn’t miss out on a free water bottle. 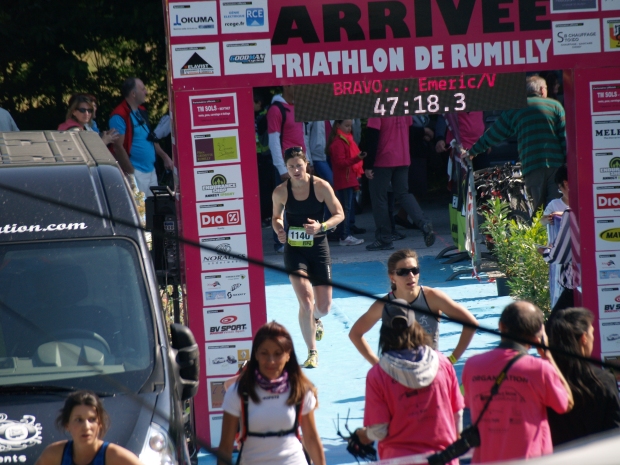 I’ve come away with a few things to work on which will hopefully improve me for the Geneva sprint event.

The Olympic distance and Ironman events took place in the afternoon. Prior to that we watched some of the younger categories. It was great seeing children competing at such a young age, albeit quite entertainingly. We were reminded of races at school sports day in which the competitors must run, stop, put some item of clothing on, run, put another item of clothing and so on… Watching the transition of these children was not too dissimilar as they came charging in, grabbing their bike, forgetting their helmet, even their shoes, in desperation to get out and cycling as fast as possible. The volunteers had their work cut out trying to dress all these children. The bike to run transition was similar except this time it was a case of who could abandon their cycling kit as fast as possible, with no consideration to where or how. It was fantastic, however, to see such determination from such a young age.

A little girl being dressed

A bike being put back properly

This week I have been doing my best by getting a variation of training sessions in and enjoying some of the lovely spring weather we have been experiencing. I’m really happy to be staying in the mountains this summer and look forward to, hopefully, getting faster and stronger over the summer.

Early morning trail run up towards Mont Chéry in Les Gets

Mont Blanc poking out of the mist 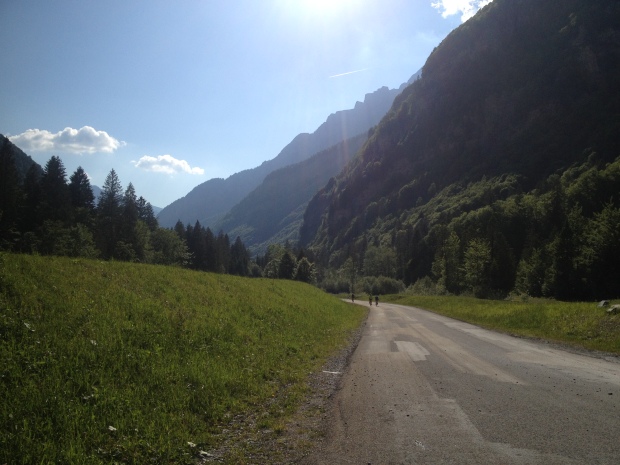 A cycle ride to Sixt-Fer-Cheval